First off, the internet (and those that try to “control” it) is ever changing.  Last month Yelp started to attack small businesses that were asking for reviews.  While it has long been Yelp’s policy to not ask for reviews, until last week they really didn’t do much to fight it off, except filter reviews.  They have updated their algorithm to more aggressively find businesses that could be asking, and send them notices and threaten to penalize their Yelp rankings because of it.

We have always wanted to help our users and empower them to improve their reputation online, including Yelp.

What we have concluded is that yes, Yelp says they have a “no ask” policy for reviews. However, they have no policy that says you can’t ask for check-in’s on Yelp. What’s a check in, you ask? It’s a status that says “I was here” and all their friends on Yelp will see this status.  It is also located right next to where they would leave you a review on Yelp…so while you’re asking for check-in’s (which is in compliance with Yelp’s policies) we believe you will get both check-ins and REVIEWS! 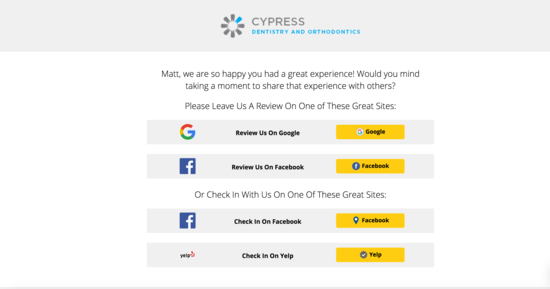 Additionally we just got special access to a private Google API!

In addition to the Google API, we have expanded our use of the Facebook API.

All of this results in our Users now being able to REPLY to Google and Facebook Reviews from inside your Review Wave account!

Once you authenticate Google and Facebook from the Integrations tab, you will see “Reply” under your reviews on the Dashboard.

This was a widely requested feature, and it’s finally here.

We now have over 2000 users on our platform!

We are incredibly happy that so many people find value in our hard work, especially after just launching our minimum viable product last year.  We have loved every minute of working we each and every one of you!  We are grateful for your help, suggestions and patience.  With thousands of lines of code working across dozens of integrations, it’s hard to not have a bump or two in the road, so we thank you and appreciate you.

-
— ,
X
by ReviewWave
Font Resize
Contrast
Accessibility by WAH
[email]
[email]
[i]
[i]